Asbestos fibers have been used in a wide range of household, commercial, and industrial products throughout the years. When these fibers are inhaled or ingested, they can cause serious asbestos-related diseases such as mesothelioma, lung cancer, and asbestosis.

Get Your Free Mesothelioma Guide
Table of Contents

Asbestos is the name given to six minerals with long, thin fibers found naturally in rocks and soil. The word “asbestos” comes from the Greek word for “inextinguishable,” which refers to the material’s ability to withstand high temperatures.

Despite its proven health hazards as a carcinogen, asbestos is still not banned in the United States. And for many years, asbestos companies knew of its danger but failed to warn people.

If you are concerned about asbestos in your home or at your work, there are steps you can take to protect yourself and your family. If you or a loved one has been diagnosed with an asbestos disease, you should speak to an experienced asbestos attorney about your right to compensation.

Contact us today for free legal advice about your asbestos claim.

Why was Asbestos used?

Asbestos was widely used in many products and building materials during much of the 20th century.

Asbestos is still not completely banned in the U.S. Thirty-three million houses and businesses in the U.S. contain asbestos, the U.S. Environmental Protection Agency estimates.

Most people who develop malignant mesothelioma were exposed to asbestos on the job or during military service.

Some were exposed in their own homes.

Families of workers who were exposed to asbestos in the workplace are also at risk. Asbestos fibers often cling to the clothing and hair of workers, then fell off at home, exposing family members to the risk of acquiring this terrible cancer.

Have You Been Exposed to Asbestos?

Asbestos was widely used in equipment on Navy ships, Army tanks, and Air Force aircraft. Now, thousands of veterans and civilian workers are suffering from asbestos-related diseases, including the asbestos cancer mesothelioma, lung cancer, and asbestosis.

Military veterans, in particular Navy veterans, account for more than one-third of the 3,000 cases of malignant mesothelioma reported each year in the United States. Because the disease has a long incubation period (as long as 60 years), many older veterans are just now showing symptoms of asbestos illnesses.

Veterans who have been diagnosed with malignant mesothelioma and other asbestos diseases should speak to an experienced attorney about their options for compensation. You would not be suing the military or former commanding officers. Rather, veterans can pursue compensation from the companies that sold asbestos products to the military.

There are six types of asbestos fibers, and they fall into two categories of silicate fibers:

All types of asbestos cause mesothelioma and lung cancer.

Asbestos was widely used in many products and building materials during much of the 20th century. In fact, 33 million houses and businesses in the United States contain asbestos, according to the Environmental Protection Agency.

You may be able to identify asbestos materials by looking at them with the naked eye, but a qualified professional with federal government training or certification courses can take a sample of the material and examine it with a special microscope to confirm it’s asbestos.

Because asbestos was used in so many building materials and common household products, many homes built before the 1980s contain asbestos. People who live in older homes, as well as those who work on renovations, repairs, and demolition, may be exposed to the dangerous fibers when asbestos-containing materials are disturbed.

Some of the common asbestos-containing materials found in the home, according to This Old House, include:

If you suspect materials in your home contain asbestos, do not disturb them (such as by scraping, sanding, or sawing). Contact an asbestos removal professional to discuss what you should do to protect your health.

Many people who are diagnosed with asbestos diseases such as mesothelioma were exposed to the dangerous material at work.

Still today, workers run the risk of exposure without proper protection from their employers.

The most common civilian occupations with asbestos exposure include:

The U.S. Occupational Safety and Health Administration now mandates safety standards to protect workers from asbestos health hazards. Employers must provide protective equipment and regulate the area. If workers are exposed, they must be monitored for health effects. 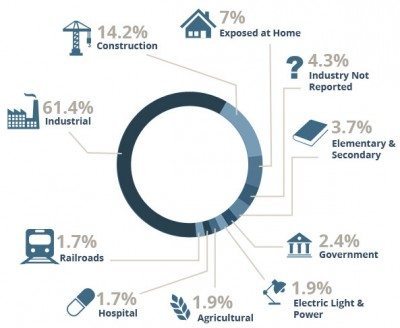 Unfortunately, these types of asbestos safety regulations have not always been in place. For decades, people worked with cancer-causing asbestos materials with no protection.

Disturbingly, asbestos companies knew of the danger workers were facing but failed to warn them.

Workers’ family members also risked secondhand exposure to take-home asbestos, which was transferred on workers’ clothing, skin, or hair to the home and then inhaled by others in the household.

The different characteristics of the various types of asbestos led to them being used in a wide variety of products, from construction materials to automotive parts, laboratory equipment, shipbuilding materials, and fabric.

Chrysotile, anthophyllite, amosite, and crocidolite asbestos have all been used commercially.

How to Prevent Exposure to Asbestos

If asbestos is found, two types of actions may be recommended:

There is no safe level of asbestos exposure, so don’t risk trying to remove asbestos materials on your own. Hire a qualified contractor to perform this job to avoid causing any exposure to your family or to workers. Find an asbestos removal professional near you.

What should I do if I have been around asbestos?

Although asbestos is extremely dangerous, not everyone who is exposed will suffer from an asbestos illness. If you suspect you were exposed, the best course of action is to schedule an appointment with your doctor to discuss it.

Your doctor might recommend you get regular chest X-rays, CT scans, and lung function tests. Although there is no test for asbestos exposure, regular monitoring can help detect any signs of lung disease early.

Have you or a family member been diagnosed with mesothelioma, lung cancer, or another asbestos illness? If so, you may be entitled to compensation.

Let us connect you with a respected asbestos attorney who can review your case and discuss all your options. This may include pursuing a claim through an asbestos bankruptcy trust fund, filing an asbestos lawsuit, and/or filing for government benefits, such as VA benefits.

Do not worry about how much it costs to hire an asbestos attorney. Our lawyers will provide a free consultation and will not charge anything unless and until they secure compensation for you.