When I was a small child and would hear that someone had cancer, I couldn’t comprehend what that meant and in my case, it was always old people. So initially I began to equate it to the elderly and death. These people that contracted cancer were also sort of mythical to me while I was growing up. I was never a direct victim back then in my early years. Oh, how I yearn for the ignorance of youth at times.

My first dance with the big C was in my early twenties. It should be described more as a “scare.” I had for the first time in my life had a pap smear that gave me abnormal results. That then lead to a biopsy and then a procedure called a LEEP. I was educated on the wonderful HPV virus and told how lucky I was that I didn’t need additional treatments, so I moved on with my life just feeling a little less invincible.

Cancer decided it would leave me and people close to me alone for a while and then suddenly it decided to change my life and the lives around me drastically. To tell the story, I need to go back to before I was even born.

Imagine spending your childhood in the 50’s and 60’s on a big farm. Having a mother that made fresh breakfast every day with the eggs from the chickens on the farm. You drank milk from what the cows produced on the farm. Everything was green and fresh. You would play outside barefoot with the barnyard kittens and your farm dog would follow you all around when he wasn’t sleeping under a tree or chasing a tractor.

Your family owned several farms in the area and hundreds and hundreds of acres, so when it was nice and you got older you and your younger sister would go on bike rides to visit and play with other relatives that lived on the other farms. Sometimes even with all that excitement you would get bored and even though your Mother would get cross at you; you would ride to the outer borders of the town that was close by and play there.

That was extremely entertaining. There was a huge factory there with a huge parking lot that after the day shift workers went home would get very empty. Lots of fun for kids and their imaginations. Back then, cops wouldn’t kick children out for trespassing because the businesses weren’t worried about the next law suit that might occur yet. So, this left for hours of entertainment. Four square games, tennis matches and different hop scotch games would take place just to name some examples. Then tired and tuckered out, everyone would return home to get the sweat off their bodies, maybe evening chores, or dinnertime.

Everything seemed so simple and pure back then. No one was worried about the billows of white, gray, and black smoke that came out of the factory. They didn’t worry about how they disposed their waste and the fact that this factory bordered a creek and the Kreider’s Dairy Farms. It brought jobs and industry to a small town in Lancaster. It was Manheim’s Raymark Asbesto’s plant.

The factory opened in 1906 bringing more than 500 jobs to the small country town. It was mostly shut down by the 1980’s and totally closed by 1998. Asbestos has been linked to cancer and mesothelioma. Mesothelioma is sometimes even called the “asbestos cancer.” It affects the thin lining that encases our organs. Of course, only people that worked at the factory would be at risk for this type of cancer. Wrong!

My mother-in-law, Patricia Kreider Johnson was that child mentioned above. Living and growing up in that pure country life. She grew up with fresh food straight from the farm and had no lack of exercise. Who knew that just living a little over a mile from the asbestos plant would have such a horrendous effect on her life 50 years later.

In 2011, my husband and I were driving when we got a call from Brian’s (my husband’s) grandmother. The typical grandmother checking up on her grandson conversation.   During this conversation, she asked him if he talked to his mother. He responded, “No, why.” She then told him that his mom, who was a hospice nurse, hasn’t been at work for three days. She had been ill and not sure what was making her sick. At this point, they suspected a bad case of the flu.

A week later, still no answers. Now we were all very worried and concerned. Bloodwork was coming back normal. How could this be? The woman was so fatigued she could barely lift her head. She was sleeping two-thirds of the day. This was not normal for anyone who knew her. To say she was active is an understatement. She could be a whirlwind.

Two more weeks later, she finally had her diagnosis. Stage 4 mesothelioma with approximately 6months to a year life sentence. We were in shock. Incurable. We were in denial. The family opted to try to extend her life with no avail. The treatments just made her weak. They made her even more immunocompromised so she couldn’t be around the grandchildren. She slept all the time and had so much pain. Pat passed away almost 9 months after her diagnosis.

At the same time my grandmother, who also had cancer but of a different kind also passed away. This was my first real time with any loss and not only did I have to grieve my Nana but also my mother-in-law. How was I supposed to be there for my husband and children as they lost their mother and grandmother? Those weeks and months are a blur.

It was about six months later, November 2013 I enrolled in my first class to take that spring semester with the goal of a nursing degree. My Nana always would say to me “you should have been a nurse” when I was taking care of her and I could honor my mother-in-law at the same time. I will never be able to fill Pat’s shoes. She was an incredible nurse.

I have one more year left. In the beginning, I was taking classes part-time and working full-time, but I started to get so eager about fulfilling my dream that I enrolled at PA College of Health Sciences for the fall of 2016 full-time. My daughter and I are freshman simultaneously at a different school. I also have three amazing boys and am trying to pay for the rest of school by only taking out the federal loans. This has been difficult, going from a two-income household to one income. My husband has been super supportive. I thank God for him every day.

Finally, this is what cancer did to me. It took away two amazing people in my life in a short period of time, but it let me say goodbye. It taught me that each day is a gift and to respect time and make the most out of it. It taught me that every chance you get to see or talk to someone you love, you express it and never say goodbye to them without “I love you” attached. It taught me to look at life differently and I can’t quite explain that but I just know I do; I look at it so much differently now. 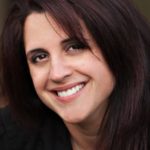 I’m a wife and mom of 4 wonderful children and currently working on my RN. My oldest is also in college. I love to live life to the fullest. My favorite saying that I learned from my Dad is “Living the Dream” when anyone asks how I am doing. When I talk with people about mesothelioma, it amazes me, in my area especially, how many people have not heard of it.