A yellow Post-It note is stuck over his mouth with a drawing of a huge smile on it; a furry stuffed hedgehog sits precariously on top of his head.  Memories of my Poppop always bring a smile to my face.  The side effects from the medication of the latest clinical trial didn’t make Poppop’s hair fall out, but it made it curly and wiry.  He called himself Brillo Head and would make his grandkids giggle by using our stuffed animals as his wigs.  Poppop always had a smile on his face; if the pain was too bad or if he was too weak to smile, he would draw one on his face so that we knew he was still happy inside.  He wasn’t just a survivor; he was so much more to all of those who had the pleasure of being in his presence.  Nobody knows how he could stay so positive for so long in the face of such pain and suffering.  When he was hurting so badly that he couldn’t hide the anguish, he would hide from his loved ones so as not to upset them.  It sounds cliché to say that my Poppop was such an inspiration, but it is hard to put into words how his charisma and optimism touched those around him.  He was my hero. 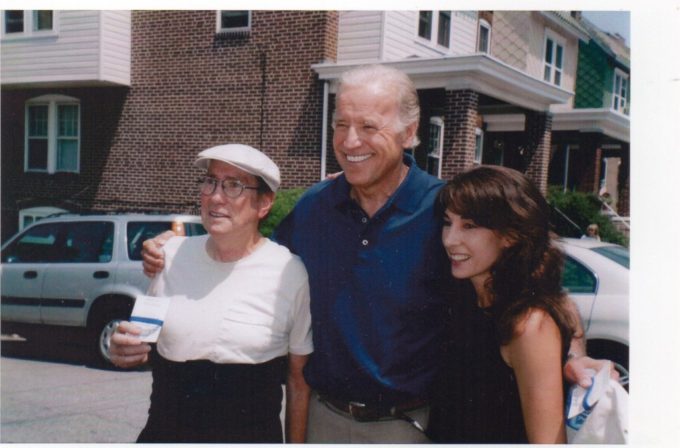 For 38 years, Carl Roca “Poppop” was a pipefitter; like millions of other tradespeople, service men and shipyard workers, he was being exposed to asbestos on a daily basis.  It wasn’t until 1986 that he got a letter from his union talking about the dangers of asbestos, and recommending that he get a screening.  It showed a little scarring on his lungs but nothing to be concerned about; the follow-up appointment with the pulmonologist confirmed that his condition was stable.  In 2001 Poppop started to have chest pains and shortness of breath.  He went back to the pulmonologist, who still didn’t suspect mesothelioma; he performed surgery to drain the fluid and he took the liberty to scrape the scar tissue.  After the surgery, he told the family that he knows what cancer looks like, he was sure Poppop didn’t have cancer and that he should be fine.  Sadly, while being discharged from the hospital, Poppop saw the word “mesothelioma” scrawled on a piece of paper.  It was up to the family to learn about this dreadful disease.

The oncologist explained that the procedure done by the pulmonologist (partial decortication) severely limited Poppop’s later treatment options such as a pleurectomy or pneumonectomy.  Also, one of Poppop’s ribs was broken during the surgery; the severe pain was from the nerve bundle that was then trapped.  Surgery to fix the rib was not recommended due to the spreading cancer.  The oncologist told Poppop that he had 6 months to live, and since chemotherapy would not cure the cancer he wouldn’t recommend any treatments.  He suggested that Poppop get his affairs in order.  If this were me, I would be ticked off at the asbestos companies and the pulmonologist who told me I didn’t have cancer.  Not Poppop—he never worried about himself, because he was too busy caring about Mommom, his four kids and us 10 grandchildren.  He wasn’t going to let this death sentence kill his spirit.

Poppop was only 60 years old; how could he have only 6 months left to live?  We spent every weekend with him in the summer, when the family would crowd into his little trailor at the beach to enjoy each other’s company.  He was just chasing me around with a live crab saying it was going to bite my nose.  Poppop was the one who took care of everything for everybody; he fixed everyone’s toilets, heaters, cars, boats and he even knew how to fix broken hearts with a smile.  Poppop would make sure everyone else’s problems were fixed before he tended to his own leaky faucet.  What would we do without our Poppop?  Everything would fall apart and no one would laugh ever again!

Have no fear, Poppop is here to put a smile back on everyone’s face.  He wasn’t going to let a little cancer destroy his family.  He would joke with all of saying “Meeezofeeeleeeheeemeeesheemeeomia– how could something with such a goofy name be so scary?”  Comic relief was our saving grace when Poppop was around.  My mom tried not to let us kids see her cry, but I remember how she didn’t go to sleep for days because she was doing research to find some ray of hope.  Finally, she found a story about a man with mesothelioma who was involved in a clinical trial and was beating the odds.  Within days, Poppop was on the phone with this survivor, and my mother had used a ream of paper printing out information about the clinical trials for people with mesothelioma.

Poppop’s 6 month death sentence turned into a 6 year stay.  He looked at each day as a gift, and he taught us to be grateful rather than resentful.  While participating in the various clinical trials, Poppop spoke to newly diagnosed patients who had no idea what they should do next.  Naturally, he found a way to make even the sickest people smile.  Mommom would tell us stories about Poppop’s antics when he was getting his treatments with the other cancer patients; his silly jokes would make not only the other patients but also the medical staff crack up.  In addition to being a great support to other cancer patients and their families, he also educated others by talking to various community, medical and labor groups.  In 2005, the Graham Cancer Center (Delaware) awarded my Poppop with the “Community Excellence Service Award” for reaching out to help others.

My Poppop also helped to raise awareness about Mesothelioma at the federal level, but that was no easy task.  He never gave up; he wrote letters until the officials agreed to meet with him, he took multiple trips to Washington D.C., and he would track down our state officials at every carnival and parade they attended.   Senator Joseph Biden (who is now our Vice President), replied to every letter, met with my father and wore the blue Mesothelioma Awareness bracelet my father and mother gave him.  When I look at the picture of my Poppop talking with Representative Michael Castle about mesothelioma, it is hard for me to believe that less than 4 months later he took his last breath.  My Poppop had to wear a tight band wrapped around him and suck on pain lozenges, but this didn’t stop him from spreading awareness. (see the attached photos)

A month after my Poppop was laid to rest, my Mommom was mailing information to the government officials with a cover letter stating, “My husband died from mesothelioma…He was in the process of writing the attached letter when his cancer became very aggressive, so he was never able to mail it.  Since he was diagnosed with mesothelioma six years ago, his main concern has been to inform the public…Before he died I promised him that the letter would be mailed.  Please take a few minutes to read it.”  Years after his passing, we continue to spread awareness in his memory; along with my mother, brother and Mommom, I went to Washington D.C. and was able to share our family story with those on Capitol Hill.  I wish my Poppop could have been at my high school graduation and could see how hard I am working in college, but instead of being sad, I feel joy that he was an important part of my life.  Hopefully one day, I’ll become a Bio-Medical Engineer who helps to develop treatment options that enable those with cancer to write their own personal survival story.

Samantha Robeson is a Sophomore studying engineering at the University of Delaware. My goal is to get into the Bio-Medical Engineering Program so that I can help in the search for a cure and the development of better treatment for those with cancer. My grandfather’s brave fight against mesothelioma has inspired me to enter the field of cancer research, and I hope to make a difference.