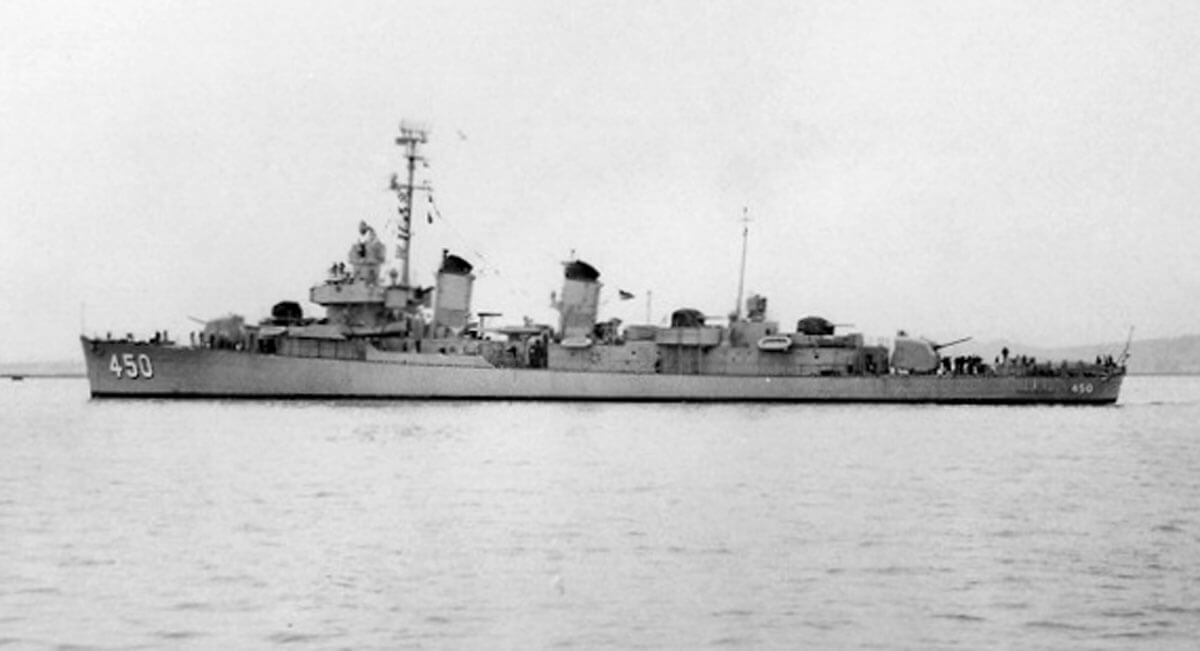 Admiral William F. “Bull” Halsey, commander of aircraft carrier USS Enterprise (CV-6) during World War II, wrote in the foreword of the book Action Tonight, that the history of the Asia-Pacific conflicts of World War II cannot be accurately written without mentioning the heroic exploits of USS O’Bannon.

Named after 19th century Marine officer Presley Neville O’Bannon, USS O’Bannon was one of the first two Fletcher-class destroyers launched by the Navy. It was laid down at Bath Iron Works Shipyard in Maine in March of 1941, and launched 11 months later. O’Bannon was commissioned in Boston in June of 1942, and immediately made its presence felt in the Pacific.

Brush With Destruction At Guadalcanal

It was November 13, 1942 when the Japanese battlecruiser Hiei was ordered to Guadalcanal to lead a fleet of destroyers against U.S. Task Force 67.4, which included O’Bannon. It was right around midnight when the two fleets began converging on one another, but a thunderstorm delayed what would inevitably be a mass shelling of the American fleet by the Japanese.

Admiral Daniel Judson Callagnan, who was aboard the American flagship USS San Francisco, had the Japanese fleet near Savo Island plotted within firing range for at least 6 minutes, but failed to give the order to attack. The Japanese, meanwhile, unleashed both armor-piercing and bombardment shells on the American fleet. USS Cushing, the first ship in the battle line, was almost immediately destroyed before firing several torpedoes at Hiei. USS Laffey, the second destroyer, hit Hiei with gunfire, killing several crew members, including the Captain. But it also succumbed to torpedo fire from the Japanese destroyer Teruzuki.

O’Bannon and USS Sterett were the next two destroyer in line in a now congested, fierce battle between the two fleets. Some excellent maneuvering saved O’Bannon from ramming several sinking ships, while its close proximity to Hiei saved it from being struck by enemy bombardment shells. The battle lasted only 38 minutes, but was one of the most destructive of World War II. Two American admirals were killed, four of the 13 U.S. ships in the battle were sunk, and several others severely crippled. USS Fletcher was the only shipped to come out completely unscathed, while O’Bannon suffered only minor damage from friendly fire.

USS O’Bannon would continue to serve in the South Pacific through October of 1943. President Franklin Roosevelt awarded the ship with a Presidential Unit Citation for combat heroism not only for service in Guadalcanal, but also for the Battle of Kula Gulf. The President specifically pointed out O’Bannon’s rescue efforts during those three days of hostilities in July 1943, along with destroying enemy positions on the islands’ shores. O’Bannon received a total of 17 battle stars, making it one of the most highly decorated ships of World War II.

When the war ended, O’Bannon was mothballed (sealed for long-term storage) before being used as an escort during the Korean War. O’Bannon would then be used as an airplane guard during the Vietnam conflict. The ship was finally retired in 1970 and scrapped in 1972.

The latency period for asbestos-related disease, particularly mesothelioma, can stretch upward of 50 years. Shipyard workers and Navy veterans who served aboard USS O’Bannon were exposed to asbestos during their service. Symptoms such as a chronic cough, shortness of breath, chest pain, and sudden weight loss should all be taken very seriously. The sooner a mesothelioma diagnosis is made, the more treatment options that will be available to you.

If you have been diagnosed with mesothelioma, contact an experienced Belluck & Fox, LLP attorney in asbestos-related cases to determine if you are entitled to compensation.